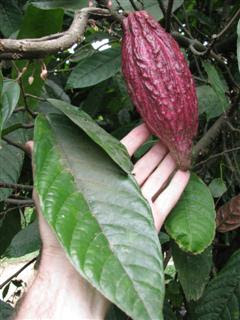 
According to both archeologists and Mayan spiritual elders, the Cacao Spirit was one of the most powerful deities in ancient Mayan cosmology.  While the ancient Mayans and Aztecs of Southern Mexico and Guatemala are best known, there are contemporary Indigenous cultures in Central and South America who continue cacao use in shamanic ceremony, preferring it to locally available psychedelics.  With today’s psychedelic buzz, you may not have heard much of them.  Although one of this world’s finest spiritual or shamanic partners, cacao was ignored in the ‘60’s resurgence of medicine plants because it does not act like a psychedelic – it does not take you on its trip, but facilitates your own.

Ceremonial details of how ancient cultures used chocolate are not known.  It is Cacao’s choice to return at this time, and I am having fun being part of Her flow. 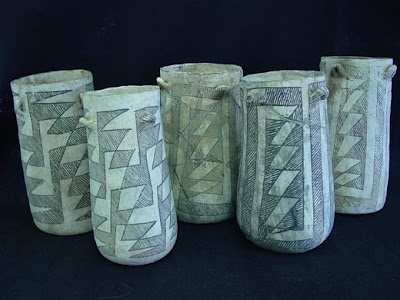 
About 200 cacao drinking jars dated 900 to 1000 years ago have been unearthed in and nearby 800 room Native American Pueblo Bonito in Chaco Canyon, northwestern New Mexico, USA.  The jars are the same shape as Mayan cacao drinking jars of the same period… the decoration is pure Chaco.  The nearest available cacao is more than 1200 miles (1920 km) south in Mexico.  At 8 to 10 servings per pound (454 gm), that much cacao would be heavy!  With a local psychedelic and 2 major psychedelics (psilocybin mushrooms and peyote cactus) much closer, why this huge expenditure of effort to obtain cacao… what did they know?  Were they simply using cacao for a stimulant as the researchers suggest?

There are contemporary Indigenous peoples who use cacao to facilitate a type of collective lucid dream where all journey together in another dimension.  A story:

Invited to visit… walking in past the lower trail guardians (they don’t do tourists)… the shamans were not in the village.  A 9 year-old led the way up to the caves.  Through the limited Spanish on both ends, it was shared that before they went to war with another people, they spent a month meditating in those caves.  When does the war start?  Last week.  Over-shoulder glances to howling laughter.  So they used the term ‘war’ because that is how they understand we solve our differences with other peoples.  They sit in a circle, drink cacao as they have been doing, and as a group meet the representatives of the other people, who drank in another cave, in an adjacent dimension.

Their spirits I have met connect in a similar way - in their world.  If one doesn’t work in this way, they can't participate - there is no ceremony to ‘learn’, and there is no psychedelic cacao to take one there.

In a working partnership with the Cacao Spirit, may I suggest you use cacao with that journey intent.  This site is not specifically oriented to shamanic use… I trust the profound opportunities should be obvious, or would become so on sampling some ceremonial grade cacao.  As a major overlooked entheogen that many are already deeply connected with, but are not using in these ways… Chocolate is calling… as the magical partner it is. 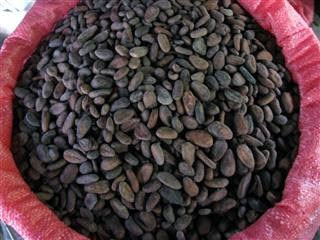 To purchase our cacao, please go to our new e-commerce website:  https://keithscacao.com  blessing

The medical profession suggests you eat dark chocolate, but they rarely tell you (except in medical journals) that commonly available chocolate has little of the compounds they have been studying.  Commercial processing developed during the last 200 years eliminates these compounds from real chocolate - 99% are missing in Hershey’s or Cadbury’s, 80% are missing in Lindt or Green and Black – so real cacao has been all but forgotten.

The instructions below will work with anyone’s cacao… however: cacao beans themselves vary in the amount of active compounds they contain by a factor of 4 (I read that in some scientific paper)… so occasional hybrids (most of the world’s commercial cacao is hybridized) have only 25% of the goodies my cacao has… other hybrids are ok for ceremonial use (I haven’t used them in many years… they sometimes work but the older varieties are my preference).  The cacao we sell is sourced by asking the Cacao Spirit where to find the best beans with the compounds and energies for our work.  With many lots of beans something has not been optimal in the genetics, fermentation, or drying.  Cacao that I have seen for sale from Mexico to Panama is quite variable, and most of it I would not truck home if it were free... tho much of it could make a yummy chocolate treat!  The next batch from the same people and the same rain-forest... and i won't want it... there is that much variability (much more so than wine!).

If you are buying 'organic cacao', sourced politically as organic and fair trade, it is often from larger seeded, easier processed, hybridized varieties - and may not be potent enough for ceremonial use, no matter how it has been prepared.  It is also likely to have lots of caffeine... too buzzy, no focus.  Any bar may have and say “85% cacao”, for example, but that has nothing to do with how much and what proportion of compounds affecting consciousness are present in that cacao.  I knew a great organic brand, but it changed completely when they sourced their cacao differently.  Try it to find out.  In my limited experience, most organic brands have delightful taste and texture, but are unsuitable for ceremony.  I have yet to meet a chocolatier who showed real interest in the active compound content of their product, tho I have known them to buy my cacao for personal use with their sweetheart… with several thousand pounds of prime ‘raw’ cacao in their storeroom.

Even the raw food folks often pay no attention to how their cacao feels… the widely available ‘raw’ cacao from Ecuador or Peru usually has 50-85% of the strength of native Guatemalan cacao that moved north through Central America with the shamans… or, others say that cacao originated in Central America – anyway, the botanists consider it a different variety.  Most larger seeded hybrids are a cross between these two varieties.  Some ‘raw’ cacao nibs work well in ceremony if you use a bit more.  The de-fatted 'raw' powder is much more variable.  Be cautious with nausea, the main consideration in eating more cacao containing more bitter to get the same psycho-active ingredients.

The cacao from Africa or Indonesia is almost exclusively hybrid.  We have sent folks to the raw cacao works in Bali where David Wolfe now gets his cacao... they try it... and end up ordering our cacao for their personal and ceremonial use.

Many South American types and the hybrid varieties bread from them have a thicker pulp surrounding larger cacao seeds and have been selected over the millennia by people using that sweet-tart pulp, which is a traditional fruit snack and premium smoothie ingredient.  Look at the seed size for the cacao you are buying; perhaps 5% of the world chocolate supply comes from the smaller non-hybridized beans.  Sure, i have seen the raw experts holding up the giant (high profit, easy peeling, requiring 2-3 times the fermentation time with it's higher heat) hybrid beans bred for millennia as a fruit snack and in the last several hundred years bred for chocolate flavor (the Ecuadorian's are proud of their 'Cacao Arriba Nacional' - bred for flavor rather than shamanic usage).

Hybrid varieties also have significantly more caffeine than traditional varieties.    Some who have a good caffeine habit prefer that extra caffeine for productive focus holding, but i don't care for it with inner work or shamanic journeying... too buzzy, no focus.  Spiritual communities using lots of that type of cacao are cranked on the caffeine, and it seems to show in the community dynamics. If you have ever had any 'aware' experience in an office environment, you can relate to caffeine being a facilitator for aggression.

The Guatemalan shaman-propagated local wild rain-forest variety cacao I offer has a thin pulp and small seeds and requires less than half the fermentation time, generating less heat and acid in the process.  According to the research scientist in the AHA article on my links page, fermentation is one of the things that can have an effect on the compound content.  The Cacao Spirit tells me that her preference is the short time and small batch fermentation of small seeds and small scale cacao production.  If I could go out and buy ceremonial chocolate this good, I wouldn’t be processing it myself!

We have sent lots of different cacao to a lab for testing and our cacao is by far the lowest in caffeine.

Spiritual cacao, eaten as whole peeled beans finger-dipped in agave nectar, is used in high-end yoga studios to facilitate that focus.  There are ‘cacao bars’ that do not serve alcohol, where one drinks cacao/ superfood concoctions and connects with others in the open-hearted energy cacao fosters – so different than alcohol (which works as a social lubricant by suppressing fear - ‘shot of courage’).  [By the way, tobacco suppresses anger and resentment, marijuana suppresses sadness.]  I hear of traders on the stock exchange floor who prefer cacao to coke for the clear focus without the crash/ recovery.  A writer I know tells me he holds 3 separate story-lines in his head and weaves his paragraphs from that.  With a cup of this cacao he tells me that he has experimented with holding up to 9 simultaneous story-lines... and he produces easier quality.  Creative facilitation, anyone?

That's right; in the drug or medicine category, cacao with the goodies in it is one of the best productive focus enhancers and creativity facilitators on the planet.  An almost untapped market, but growing… It helps the creative folks move how they block their own flow.  In my experience, the addition of coffee to a cacao brew moves it out of the creative-as-connective department and into the straight-stimulant department… but then I don't have a caffeine habit.  As a stimulant, cacao synergy improves coffee… another market.  I remember experimenting for a visiting emotional processing student who was into coffee… you know mocha, this was woke-a!  I sometimes put coconut milk, cardamom, chili, and vanilla in it.  The Cacao Spirit tells me that it will be a few years before you will be able to find this type of cacao in Starbucks.  But you will...

For most plant medicine teachers, you can extract one specific compound and call it the active ingredient.  Cacao has many active elements working together… it is a very chemically complex food – various sources claim there are 300 to 1000 different compounds in cacao… extraordinary in the plant or food world.   In this site's pages of either 'Notes Bin and Recipes' or 'Links' there are links for those wishing specifics on the active compounds.

To purchase our cacao, please go to our new e-commerce website:  https://keithscacao.com  blessings

We have introduced our cacao to some Mayan shamans (that would be the Western term) who live about 2 hours away… to 2 women with whom we have been exchanging ceremonies and inner work.  It has become a beautifully rewarding friendship… they really like the chocolate and are deepening their own way with the Cacao Spirit.  There are very few practitioners of traditional Mayan spirituality using cacao beyond to occasionally nibble a few beans if they are throwing them into the fire, and couples who marry traditionally exchange cacao beans as we give chocolate on Valentine’s Day.
Posted by Keith at 5:49 AM